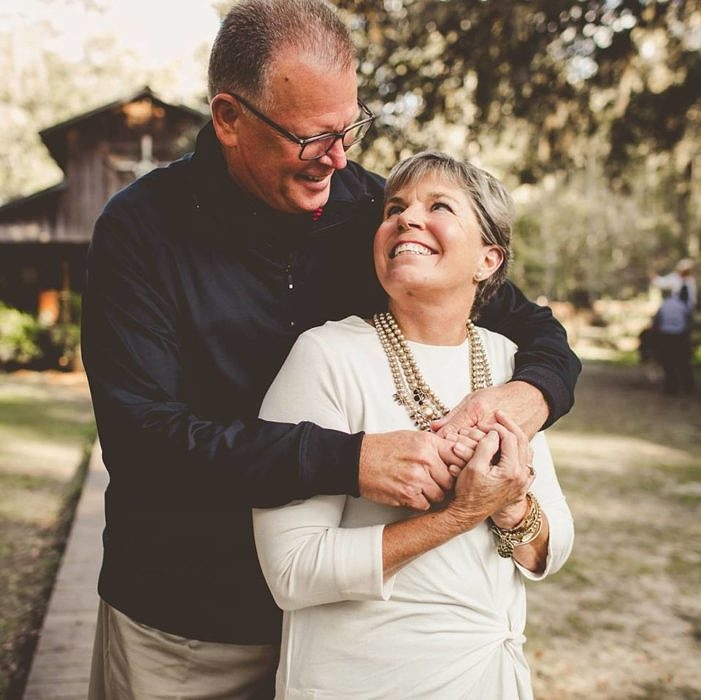 The late Claire McCool, pictured here with her husband, Mike, in 2016.

Claire McCool was one of a kind, and since her passing in November the Clay High community has continued to remember her life and legacy. Friday night the Blue Devils hosted a special charity baseball game with district rival Ridgeview to help raise funds for a scholarship in McCool’s name, as well as to honor the veteran teacher whom had such tremendous impact on so many people’s lives.

Born on August 24th, 1955, McCool was 62 years old when her battle with breast cancer ended on November 20th, 2017. In those 62 years the mark that she left in so many lives cannot be counted, which included twenty years of teaching at Clay and supporting Blue Devil athletics. She was known to be a force of positive change in people’s lives, a teacher that transcended the typical teacher-student relationship to really connect and love her students. She never lost her sense of humor either, as she was known to joke about her boyfriend who was actually her husband, Mike.

Friday night meant a chance for everyone to come together again and help raise money for the scholarship that will help to preserve McCool’s legacy.

The event was organized through several of her closest friends and Clay lifers, such as Olivia Sweat, Julie Breindel-Hill, Blue Devil Athletic Director Jay Stilanou and former Blue Devils manager Rob Thompson. McCool’s youngest daughter, Lowry, also threw out the ceremonial first pitch. Clay then jumped out with all its runs early on and secured a 6-1 victory.

“Last night’s game meant so much to Clay High and the community, because of the kind of person Mrs. McCool was,” said Clay senior Andy Yarbrough, who is one of McCool’s former students. “If you were there you saw how many people there were last night. We haven’t had a crowd like that all season. It just shows you how much of an impact she had on the community and how many people loved her.”

McCool was loved by all within the Clay community and was 100% devoted to Clay High, and that community did all it could for her as well. Deanna Johnsey helped start a GoFundMe to support her fight, which raised $4,355 in donations. Another close friend is Olympic Gold Medalist Caeleb Dressel, who wears one of the bandannas McCool wore while she was going through chemotherapy around his neck during his races. NFL veteran Cliff Avril is another close friend that discreetly offered more assistance than most may realize. There was never any doubt that anyone would give all they could to the former senior class sponsor who was also well-known for being a huge part of Homecoming every year.

“I started coaching shortly after I graduated, so I was one of those guys that kind of never left,” Clay manager and former student Josh Persinger said. “But she was a teacher for over 20 years and, first of all, she was a very good teacher. She taught AP students and all her kids passed their state board tests. If you ask around people will tell you that Clay High is a very special place, and there are eight of us that were former students who are now coaches and teachers there. There is a reason we all come back, and that reason is people like Coach Rob Thompson and Mrs. McCool. She was great in the classroom, but what she did for her students out of the classroom and those relationships is what mattered most. She built those bonds, and I only know about the male athletes, but it was the same thing with the female athletes.” 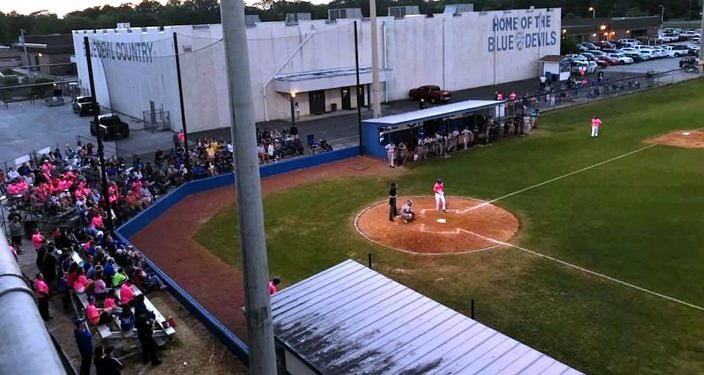 Fans packed the house in support of Friday’s charity game, many purchasing pink t-shirts to promote the scholarship in honor of Claire McCool.
*Photo courtesy of Diane Brooke Salazar.

She gravitated to the highly academic and the athletes, two different polars that were her niche in finding those ones that needed a little something extra. Coach Persinger suspects baseball may have been her favorite sport, as some of her closest students were baseball players. She was a giver and her love knew no limits, and she was one of the ones that nurtured the love for Clay High.

“Guys like Coach Thompson, and several other coaches, make Clay High what it is, and Mrs. McCool is that,” Persinger said. “She came out to all the events, and she really loved baseball. She was my teacher and when I started teaching she really took me under her wing at the time. She was the Math Department Head and her and Coach Thompson were a big part of me getting the job as a teacher and a coach. That is me and my personal part, but I am just one of the many people.”

Another of those many people is Ridgeview manager John Sgromolo, who is himself a Clay graduate. The Panthers were honored to take part in the charity event. With a packed house of fans primarily dressed in pink t-shirts sold as part of the fund-raising, fans of both teams were united in the cause if not for the victors. 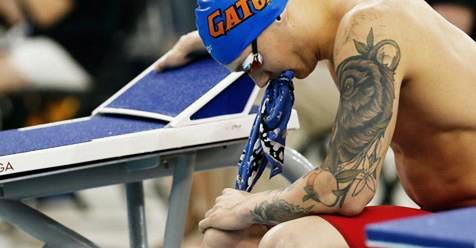 Olympic Swimmer Caeleb Dressel, with Mrs. McCool’s bandanna that he wears in her honor while he is competing.

As important of a game that it was for both sides, the most important thing was the memory of the woman they all celebrated together. District rivalries add to the excitement, and just makes it that much more inspiring to see those same rivals united in tribute.

“The Ridgeview Panthers Baseball Program is extremely humbled and proud to be a part of Mrs. McCool Baseball Night,” Coach Sgromolo said. “We are deeply sorry for the loss of such a great person in our community. Our donation is the least we could do for our friends from Clay. While the game serves as a great rivalry with two of the best baseball programs in Northeast Florida, we teach our young men that baseball is about way more than just the game. It is about relationships, life lessons and our community. One day the game ends, and all of the other important things are what matter most. We are honored to have participated and we wish the Clay family the best of luck the rest of the way.”

Perhaps inspired by their emotions, the Blue Devils got off to a hot start with a four-run second inning that accounted for the winning runs. Clay is now 15-5 overall and 6-0 in 6A-4, and has secured the top seed in the district. The Panthers (13-5) finished district play with a 6-2 mark to secure the second seed. It was only fitting that two teams having such quality seasons met on this night.

Pitching helped set the tone for Clay, as once senior Connor Solomon started on the mound he did not give the ball back until the night was over. The right-hander allowed one unearned run on three hits and two walks, and he amassed an impressive 13 strikeouts. 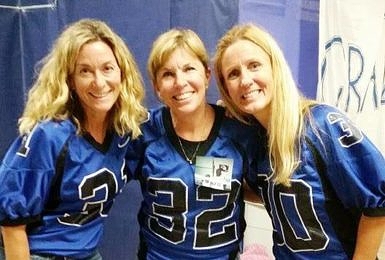 It was just one of many big performances on the night, which also helped to add to the excitement for the huge crowd in attendance. Perhaps not all the fans were necessarily baseball fans, but rather there for the cause, and stand-out performances such as Solomon’s always leave a lasting impression with everyone that witnessed it.

Another area that also left a massive impression came in the t-shirt sales. The idea was simply to offer them at a very affordable price of $8 dollars, simply to help get the scholarship information further circulated within the community. Yet most fans simply paid with a ten or twenty-dollar bill and did not want any change back, which led to them raising $400 towards the scholarship in t-shirt sales alone.

“The whole premise of the game was to get the knowledge out there, and of course it happened to be with Ridgeview and is a big county game and a huge district game, so it all just came together,” Persinger said. “I do believe Mrs. McCool was smiling down from heaven. It couldn’t have gone any better, it was an excellent crowd and it turned out to be a really awesome night.”

Ridgeview reliever Brandon Dumas delivered a solid effort to keep the Panthers in the action. Dumas was called into action with the team on the ropes in the second inning, and he went the rest of the way while allowing two unearned runs. He scattered five hits and three walks and had seven strikeouts.

Evan Wickeri accounted for Ridgeview’s lone run, as he went 1-for-3, and Maury Gonzalez was 2-for-3.

Clay had a big night offensively, piling up 11 total hits. Kevin Jackson led the way by going 3-for-4 with a run, and Yarbrough went 2-for-3 with two runs. Josh Lemen was 2-for-4 and Nick Barrie went 1-for-4 with two RBIs. 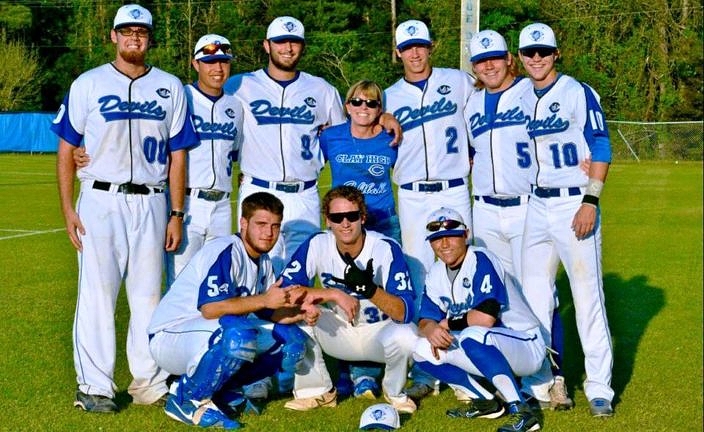 Claire McCool with members of the Blue Devils baseball team.

Coaches always want their teams to be a reflection of their values. Friday night the two teams represented everything great that the game of baseball can be to connect people in so many ways in a positive experience.

“We talked to the teams after the game and told them, ‘You do not know what you just did for that family’. Mr. McCool came out and took a picture and they all signed a baseball, and they do not know what that did for him,” Persinger said. “It is what we can do for other people, and they were more than happy to sign that baseball and shake his hand and tell him how much Mrs. McCool meant to them. We are hard on kids and maybe too tough on them sometimes, but it’s times like that where you know you are doing the right thing. These kids get it. They have good hearts and it was awesome for them. It was awesome to say I was proud of them and it really had nothing to do with the game of baseball. As a coach that is a great feeling.”