Clay Falls To Jefferson In Class 6A State Semifinal 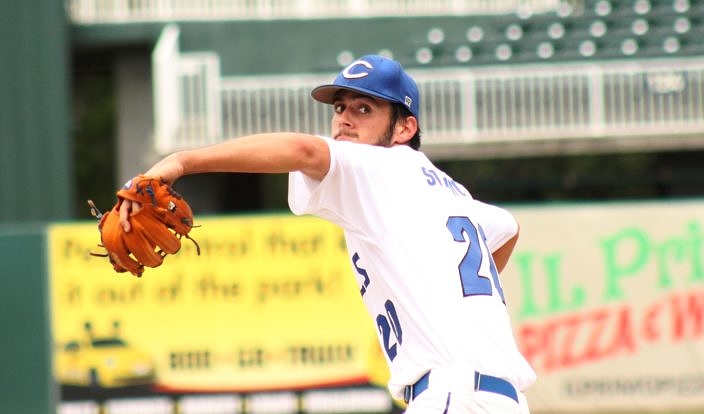 Conner Solomon made the start and took the tough loss, after five unearned runs in the third inning proved too much to overcome.

As the old saying goes, confidence is like a dragon where, for every head cut off, two more heads grow back. Playing in their first state Final Four since 1985, the Jefferson Dragons exhibited their many heads, as they dispatched the Clay Blue Devils with a 7-2 victory in Wednesday’s 6A state semifinal at Hammond Stadium in Fort Myers.

Behind another strong start from ace Michael Dominguez and some timely offense, the Dragons earned their chance to play for the program’s first state title in its 78-year history. Jefferson (21-8) will take on the Merritt Island Mustangs in Thursday afternoon’s title game, while the Blue Devils are held a game short of that ultimate goal.

“Obviously, that is not what you planned. You always want to get there to the end, but these guys have done everything that I’ve asked,” Clay manager Josh Persinger said. “Any time you are in a situation where you get this far, there is a little luck involved, and I feel like our luck ran out. Some of the balls that hopped our way in the past did not hop our way, and that is just baseball. There are a few things that I might have done different, but, as a whole, I am proud of these guys.”

Dominguez did the heavy lifting on the mound to pave the way, earning the victory after pitching into the sixth inning, before reaching his pitch limit. The right-hander piled up 12 strikeouts in five full innings of work, while surrendering two earned runs on seven hits and a walk. Although it did not show, he admitted afterwards that he was very nervous making the start. 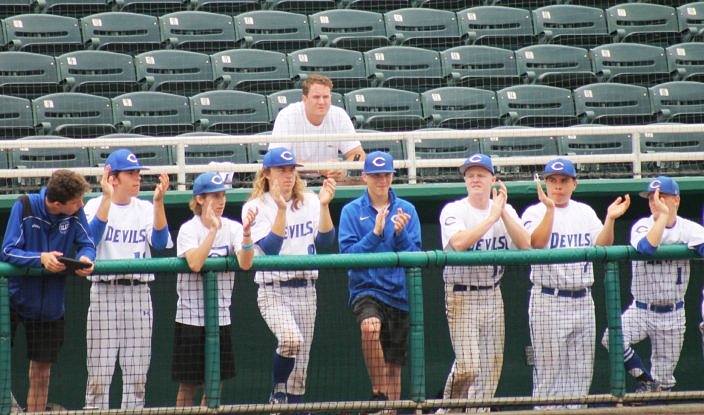 The Blue Devils cheer on their teammates as they made a late rally push.

The latter part of the Jefferson batting order did a lot of the damage, as the last four batters in the order accounted for seven of the team’s eleven hits. With the biggest moments primarily occurring with those hitters in the batter’s box, they delivered with several key hits that paved the way to victory.

The Dragons drew first blood with some unearned runs that were the difference in the top of the third inning. Andrew Mathis drew a lead-off walk, Robby Martin rolled a single through the left side and Charlie Welch reached on an error that brought in the first run. After Clay recorded a pair of pop outs to nearly escape the jam, Ty Evans broke things open with a liner past third base that plated two, as Evans slid safely into second base. Freshman Sal Vega then brought his teammates roaring out of the dugout in celebration, as he blasted a two-run home run high over the left field fence for a 5-0 advantage.

“I worked the count and I got the perfect pitch,” said Vega, after he successfully predicted his homer to his teammates before the game. “I was looking for one just a little in and a little high, so I could get my bat out there and turn on it. He started me off with a strike, and then he threw me a couple of balls and was losing it, and I saw it. I just got focused and amped it up.”

Clay (24-7) got on the scoreboard to break up the shutout in the fourth. Chase Holman drilled a shot into the left field corner and managed to reach third base standing up for a lead-off triple. Courtesy-runner Blake Parker then came in when a balk was called on Dominguez.

The Blue Devils inched closer with another run in the bottom of the fifth. Tyler Spence lined a double into the left-center field gap, and with two outs he was running hard and scored after a high infield pop off the bat of Josh Lemen landed on the grass for an RBI single. 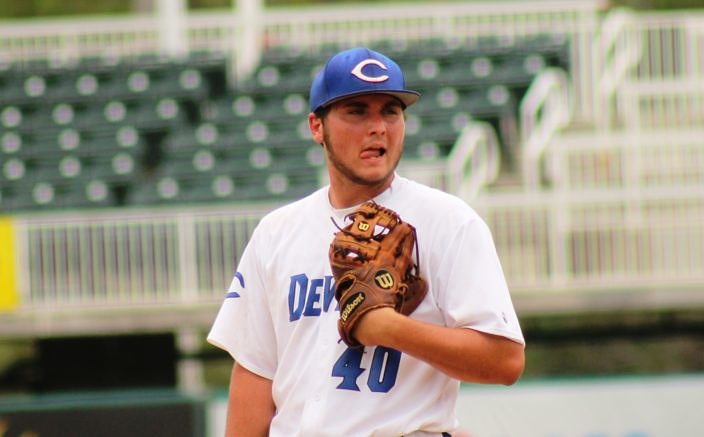 Tyler Spence came on in late relief and delivered a scoreless frame with two strikeouts.

Jefferson got those runs back in the top of the sixth, as Martin and Welch both had RBI singles that pushed things to a five-run lead for the Dragons. Martin came on in relief for the final six outs, and he held the rope to finish things off and preserve the victory. Needing just 17 pitches, Martin posted two scoreless frames to earn the save. Although Tyler Spence reached on an error to give Clay one last hope in the seventh, Martin responded with a swinging strikeout for the final out.

Even as the outs began to slip away, the Blue Devils never stopped fighting and believing they could come back. The team proved to true road warriors in taking down some of the toughest programs in 6A, such as Ponte Vedra and the Mosley Dolphins. The Dolphins ended the Blue Devils’ season in 2017, and the resolve for a second chance with them fueled the club ever since.

“We talked about Mosley for 365 days after we lost to them last year, 3-0, that we wanted to get back,” Persinger said. “I don’t know if there are a whole lot of teams that play a tougher schedule. These guys are used to tough teams, so I don’t think that played into it at all. We just got beat today.”

Although disappointed in not bringing a state trophy back to the Clay community, the Blue Devils are still assured of being welcomed home with the same love and appreciation that they left with on the team’s send-off to state earlier this week. There is a special dynamic around Clay and the surrounding Green Cove Springs community. This element transcends beyond just on the baseball field, and is something precious to each person that is a part of it.

“This baseball team is a different animal,” senior Andy Yarbrough said, as he reflected one last time on his three years on the varsity team. “Really, it is first-class. Us seniors are all going on to play college baseball, but it won’t be the same as this. If we all could do it all over again, we would.” 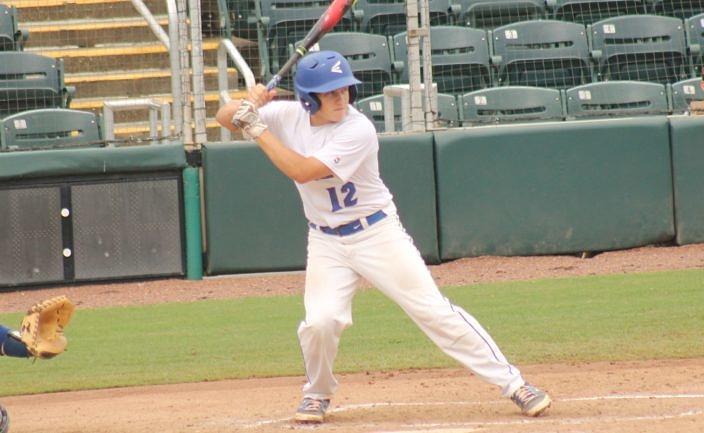 Sophomore Chase Holman was 3-for-3 with a triple for Clay.