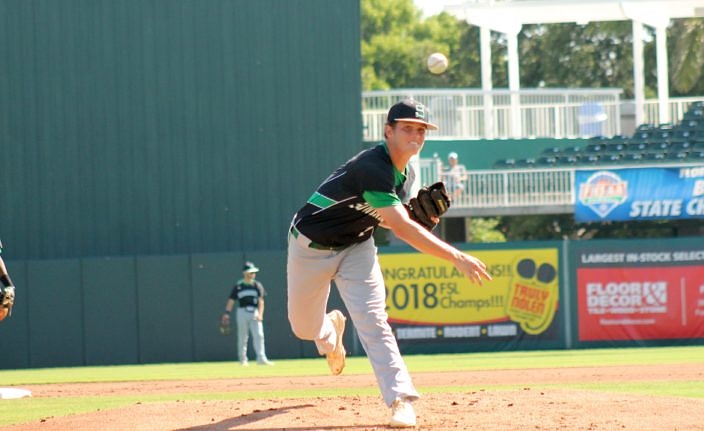 Bo Bonds went the distance on the mound for the Bulldogs, taking the tough, 2-0 defeat.

By the time the team was walking over to the field at Hammond Stadium in Fort Myers for Wednesday morning’s Class 5A state semifinal, Melbourne Central Catholic starter Nick Durgin was already locked into his zone. From the first pitch to the last, the right-hander was dialed in and locating his pitches to have complete control. The result was a complete-game, 2-0 shutout over the Suwannee Bulldogs that sends the Hustlers to Thursday’s championship.

The game was close the entire way, a high-stakes battle in which neither side ever yielded full control. The action befitted the grand stage and both sides delivered the caliber performance that brought them there, as there were no errors committed and essentially no mistakes made on either side of the field.

“It was such a good game,” Suwannee manager Justin Bruce said. “This was an awesome moment for all of our kids and all of our community, and it brought all of our community together. We ran into a pretty good arm and he commanded his fastball and a couple of different pitches. He was tough on our hitters and he didn’t allow us to get on base early to allow us to use our game. So hats off to them; they’ve got a really good program. It is still an honor for us to be here and I think we represented Suwannee real well.”

Durgin allowed just one hit throughout, while also allowing just three walks and five total base runners all day long. The senior struck out 11 and needed just 89 pitches to go the full seven innings.

“In these games you’ve got four of the best teams in the state playing, and we certainly did have to go out there and get it,” Dooley said. “That is a great club and their guy on the mound was unbelievable, and he was even better at the plate. To be able to keep them from beating us is quite a statement from Nick and our defense. No question.” 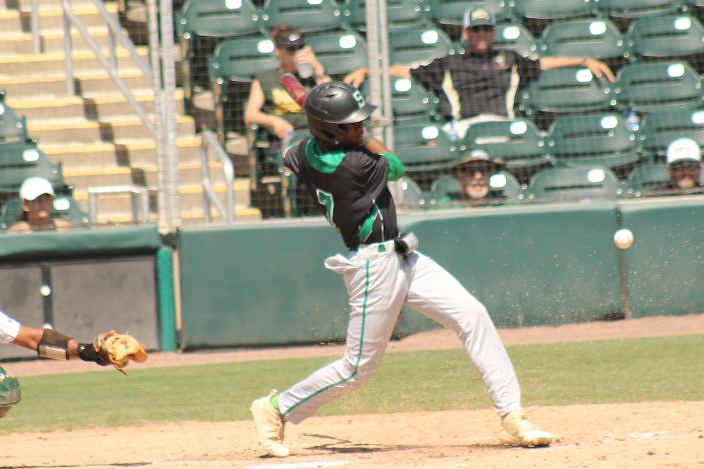 Marquis Jones connects for the Bulldogs’ only hit of the game.

The Hustlers struck in the second inning to grab a 2-0 lead. Caleb Smallwood led off by sending a liner into shallow center field for a lead-off single, and two batters later Zach Beolet put a charge in a shot deep to the left field wall to easily send Smallwood across the plate for the first run of the morning. Kevin Espiritusanto then ripped a chopper past third base for an RBI double.

“Bo pitched a really great game and he kept us in the game the whole time,” Bruce said. “We made a couple of defensive plays early to help us, but we just couldn’t get much going with the bats. We didn’t get enough runners on base, and that is a credit to their pitcher.”

Bonds also went the distance on the mound. The senior scattered five hits and did not walk any batters, while recording three strikeouts. He also hit one batter. 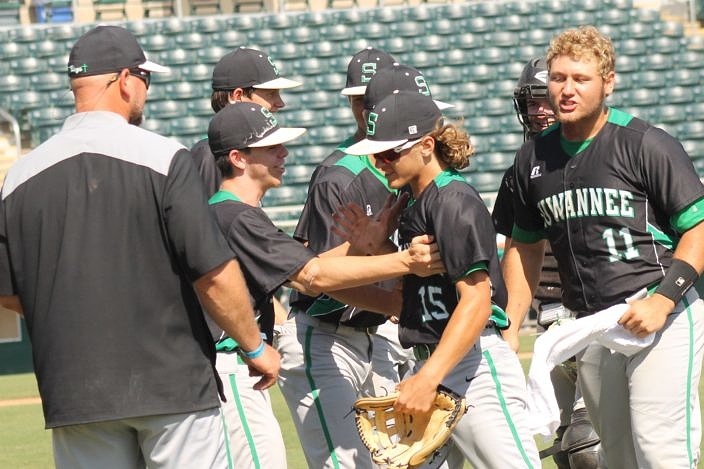 The Bulldogs celebrate following a big defensive play early on in the action.

Suwannee responded to the next scoring threat and buckled down to keep things close. Gabe Pallo started off the bottom of the third by drilling a shot that perfectly split left and center to allow him to race around the bases for a one-out triple. But Bulldogs starter Bo Bonds held the rope to halt him the final ninety feet from scoring by striking out the next two batters.

“He hit that one pretty good, and it was already 2-0 so I focused in a little more,” Bonds said. “You have got to get those outs no matter what and you cannot let that run score. You have to dig a little deeper when guys are on third base trying to score.”

The Bulldogs struggled throughout to get anything going against Durgin. The big hurler did an excellent job of mixing his looks between the curveball and fastball to start each batter, while still managing to work ahead in the count most of the way. Suwannee (20-10) did not get its first hit until there were two outs in the top of the sixth, when Marquis Jones legged out a soft roller on the infield grass. 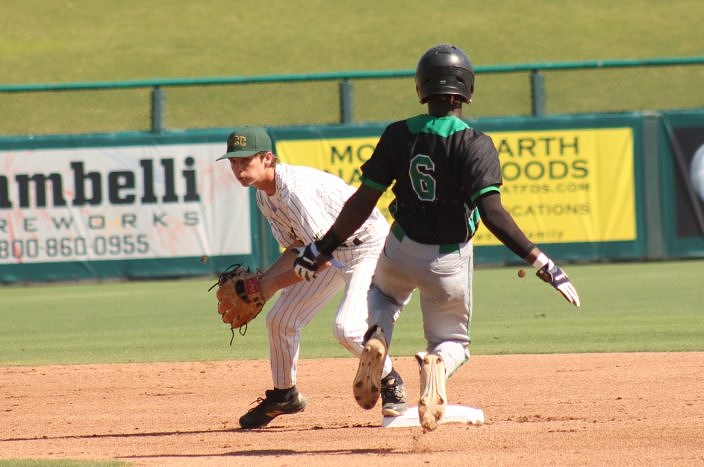 Josh Wharton slides into second base attempting to break up a double play. Neither club committed an error on the day.

“We have so many seniors in our lineup and we’ve faced a lot of good arms just to get here,” Bruce said. “We’ve been tested and we knew we were facing another pitcher who didn’t have a lot of walks and who would throw a lot of strikes. We were trying to swing at the fastball early, and I think we got a little over-aggressive. Just having a senior lineup we were able to make adjustments and start to squeeze him, but they had some defense behind them and that is baseball.”

Knowing what they were up against, the Bulldogs came in with a solid game plan against Durgin. The team has relied on its pitching and defense to get them through, and the players knew just a little bit of offense would have been enough. Knowing that they would see a lot of strikes and few walks, the hitters tried to get some looks the first time through the order, and then they made the right adjustments that gave them the best chance for success later in the action.

“Early on I just wanted my guys to settle in and get an at bat and see what they could do,” Bruce said. “The next time through the lineup we tried to squeeze him and crowd the plate and shrink his strike zone down. He started missing with some of his pitches, but he was still able to get his fastball by hitters. He did a really good job with that. I thought we battled all throughout the game and at least kept some pressure on them late in the game. We got a couple of runners on and kept battling, and I am just proud of my guys. We rely on small ball and being able to move runners and he did a really good job of keeping us off base with no outs and one out all throughout the game.”