Venice Walks Off Creekside In Extra Innings In 7A Semifinal 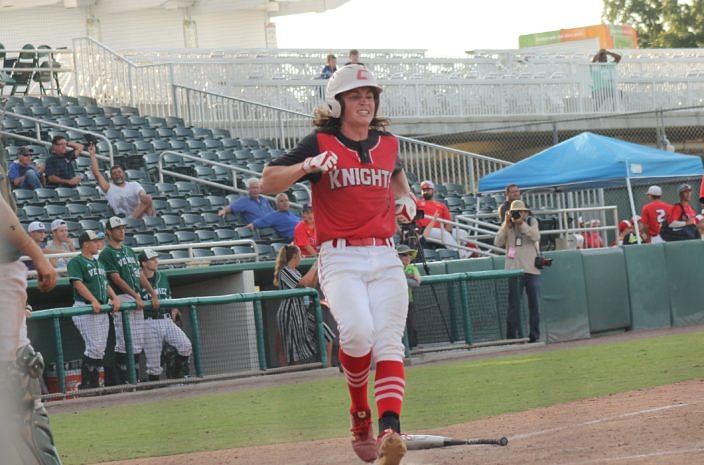 Creekside’s Connor Holt scores in the top of the seventh to force extra innings.

Friday afternoon’s Class 7A state semifinal was everything that playoff baseball should be. The contest between the Creekside Knights and the defending state champion Venice Indians provided nearly every baseball scenario one could imagine, as the two teams slugged it out like a pair of heavyweights. After three long hours of tug-of-war baseball, a throwing error in the bottom of the eighth inning sent the Indians to a 9-8 victory that ends Creekside’s season one game shy of the final goal.

“Hats off to Venice; they battled and battled,” Creekside manager Kris King said. “They’ve been here many times taking care of business. They stayed in it even despite going down by four runs early, and I tip my cap to those guys. Their coach does an amazing job over there and it shows in the way they handle themselves, and it’s a classy organization over there. So I could not be more proud of my guys and how they grind. We’ve been the underdog the entire time and we kept surprising people, but today we fell a little short. These guys have battled all season long. They’ve done everything that the coaching staff has asked for and they did a great job.”

Zac Calhoon tallied the deciding run to cap a monster day at the plate, after he started the winning rally by rolling a base hit up the middle to complete a 4-for-4 offensive showing. After Reese Jackowiak moved the runner with a sacrifice bunt, Clayton Rockymore walked and Danny Rodriguez reached on an error that pushed Calhoon to third. Jack Curcio put the ball in play and the fielder’s throw sailed high over the catcher to allow Calhoon to score and put an end to the marathon battle of attrition. 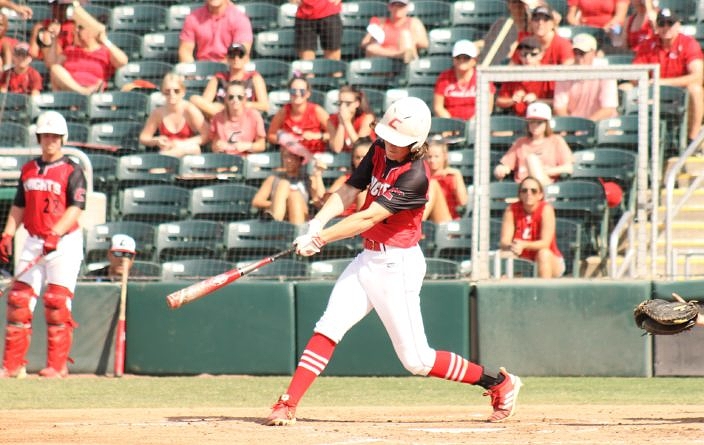 The Knights were locked in at the plate and had 10 hits in the contest.

“We had the right situation come in with a ground ball where we needed it to be, and unfortunate circumstances and it ends up in the house,” King said. “You hate to see it end that way and you tip your cap to both teams for battling. It was eight innings of grueling baseball and nobody was going to let up.”

A run in the bottom of the first staked Venice with an early lead that had the Indians in control right away. Catcher Mac Guscette was hit by a pitch and then was replaced on the bases by courtesy runner Clay Callan, who was erased at second base when Creekside starter Mitchell Fairgreve fielded a bunt from Michael Robertson and fired to second in time for the force out. Kevin Dubrule then reached base on an error that advanced the runner into scoring position, and Calhoon singled up the middle and then beat the throw to first to allow Robertson to score.

“We’ve been able to keep ourselves a secret in the way that we play,” King said. “Some games we rely on guys driving the ball into the gap, in tight games you’ve got to squeeze and bunt and move guys over. We were fortunate to come up on the positive side of that, but we prep for this every single day. The stamina that these guys have and what they put into it, I cannot thank my players enough.”

Venice (25-6) tacked on two more runs in the second. Rockymore and Rodriguez both singled to start the frame, and aggressive base running kept them ahead of the defensive throws to set up a scoring opportunity. An infield ground out from Marek Houston pushed Rockymore home, and Guscette followed by drilling a shot deep into the left-center field gap for an RBI triple and a 3-0 Venice lead.

Creekside answered back in the third. Farid Eljaiek singled to left and Antonio Colon dropped down a sacrifice bunt that resulted in a throwing error that put runners on the corners. Mark Castle sent a chopper up the middle for an RBI that put the Knights on the scoreboard, and an infield error again set up runners on the corners still with no outs. 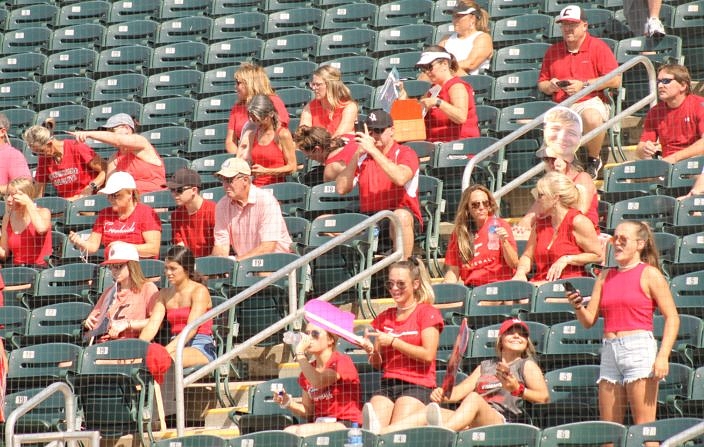 The Knights enjoyed strong support from their loyal fans that made the trip to Fort Myers to root on their team.

The Knights (23-7) put the foot on the gas to keep the momentum going, and that aggressiveness served them well. Castle went in motion on the pitch and left Venice starter Orion Kerkering with only one option when the next batter sent a grounder right back to him at the mound, settling for the first out at first base. Daniel Cantu walked to load the bases, and the Knights benefited by catching the Indians out of position on defense as Jacob Topping dropped down a bunt that allowed two runners to score. Connor Holt then put Creekside ahead with an RBI ground out that drove in Cantu for a 4-3 lead.

Creekside kept applying the pressure with its next swings in the fourth. Colon smoked a double deep to center and Castle followed with a single for runners on first and third with one out. Castle timed his pitch and swiped second to erase the double play opportunity, but the Indians brought the infield defense in and managed to catch the lead runner in a rundown after Josh Frisbee hit into a fielder’s choice to the shortstop. Cantu was given an intentional walk to create a force-out situation at any base, but Topping instead made them pay by lining a hit to center that drove in two runs.

“I was just trying to pass the bat to the next guy and get something going,” Topping said. “I was listening to what Coach was telling me and sitting on the right pitches. We knew we were going to see it down low so we expected it to be away, and we had to get up on the plate a little bit.”

Creekside just kept finding holes to put the ball through. Holt rolled a single past the diving second baseman to bring Cantu in and push it to a 7-3 advantage, which prompted a call to the Venice bullpen for reliever Clay Callan. Callan got a called third strike to get the Indians back in the dugout.

Venice wasted no time in answering back in the bottom of the fourth. Danny Rodriguez singled on a flare to shallow right and Houston reached on an error. A passed ball moved up the runners, and Robertson supplied a base hit to center to drive Rodriguez home. 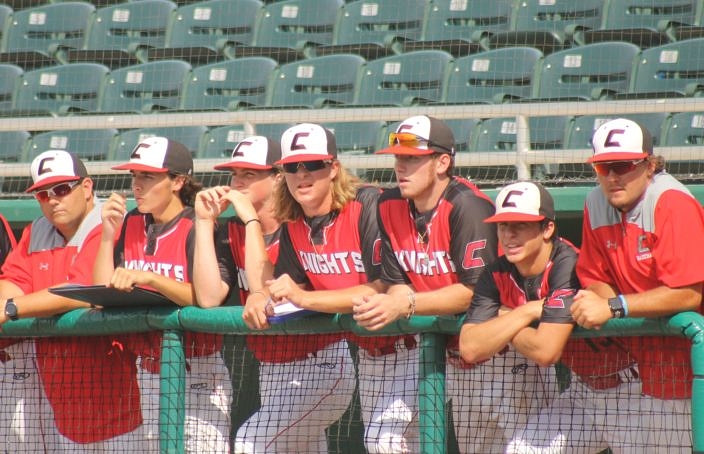 The Knights reached the Final Four for the fourth time over the past seven seasons.

The Indians got another rally going in the fifth. Calhoon singled, Jackowiak was hit by a pitch and Rockymore dropped down a sacrifice bunt that resulted in bases loaded when the runner beat the throw to second base. The Knights got a force out at the plate for the second out of the inning, but Houston kept things going with a slow bouncer up the third base line that pushed a run across while leaving the defense with no play to make.

Coming back around to the top of the order, the Indians found themselves with the bases loaded and one of their most fearsome hitters at the plate. Guscette did not see any pitches to hit and instead drew an RBI walk that pulled his club within a run of evening things back up. A liner to shallow left nearly found the grass to break things open again, but Colon was there to make the catch for the Knights.

“You cannot describe it,” Castle said about the emotional rollercoaster it was playing in that tight contest. “The highs and the lows, it is all fun. You look up and see the stadium and the crowd is going and you can’t ask for much more than that. It’s amazing, just unbelievable.”

With outs slipping away, Venice struck in the bottom of the sixth. Dubrule led off by slicing a shot into the right field corner and racing his way to a double. Pinch-hitter Conner Miller and Calhoon both walked to load the bases, and a balk resulted in a tie game again.

An infield grounder held the runners and let Creekside record the first out, and with a base open the Knights then elected to walk Rockymore and reload the bases to create a force to any base. But four pitches later Rodriguez drew a free pass and Miller crossed the plate on the RBI walk to put the Indians back on top. 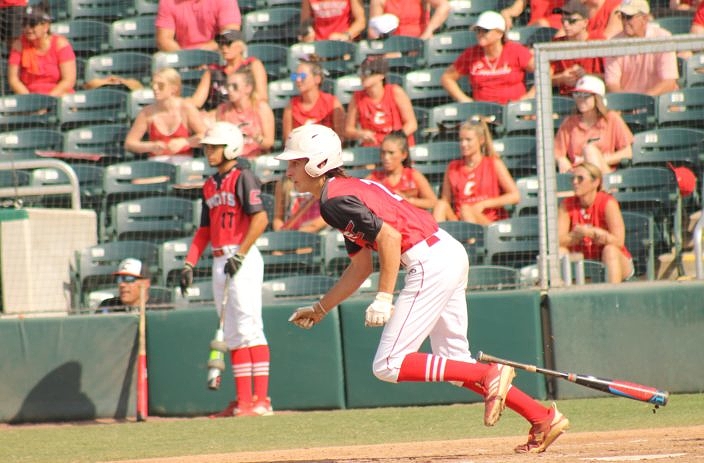 Fletcher Cline puts the ball in play and reaches on a fielder’s choice for the Knights.

Creekside simply refused to go quietly. Holt split the left-center gap for a lead-off double in the top of the seventh, moved to third thanks to a sac bunt from Brinole and scored two batters later when Eljaiek bounced an RBI single past the diving second baseman.

“We did everything as a staff and as a team to get ready for what we were going to face, and the chips didn’t fall in our direction,” King said. “These guys do this for me everyday. During the season I grind on these guys and break them down. I’m not the nicest coach when it comes to it, because I want to drive the best out of them. Their heart and the desire that they put into this is a true testament to how hard they work. I tell them before every game to leave it on the field, and I promise you that they left it all on the field today. Both teams did.”

Having left their hearts out on the field, the Knights left knowing that they gave it everything they had. The pain of defeat is never easy to endure, especially with how badly they wanted to reward their fellow teammates after everything they all sacrificed to reach this point.

“You just form a brotherhood over the years through the grinding days and the long practices,” Castle said. “You get to the point where you’d do anything for these guys. To not come away with the win is tough.”