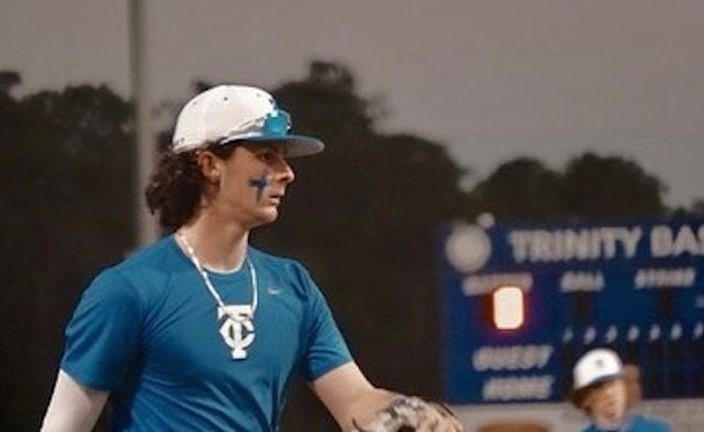 All he needed was a base hit off a good swing. With the winning run a mere ninety feet away, anything in play would likely have led to a victory.

Instead, Ashton Nugent struck a ball that nobody may ever see again.

The sophomore connected cleanly on an 0-1 pitch and sent it sailing high and deep into the night sky beyond right field for a three-run, walk-off home run. Nugent rounded the bases at a sprint and quickly celebrated with the rest of his Trinity Christian teammates, following the 6-3, extra-inning victory over the visiting St. John Country Day Spartans on Tuesday night.

The battle between two top-ranked teams from the HSBN Jacksonville Power Rankings more than lived up to the billing. They slugged it out like heavyweights for nine grueling innings, in a contest with four lead changes in all. The #11 Conquerors (6-3) rallied back to tie the game in both the seventh and eighth innings, after giving up a 1-0 lead with two runs in the top of the seventh.

After reliever Ethan Wilford held the Spartans (8-2) scoreless in the top of the ninth, Eric Fouraker and Alonzo Austin both walked to start the bottom of the frame. The #3 Spartans made a valiant attempt at disrupting the rally by running some infield pickoff plays that had the defense moving. But the plan backfired when the ball got away and the runners advanced, putting Fouraker at third base representing the winning run.

Nugent made the rest of Fouraker’s trip home an uncontested event.

Trinity grabbed the lead early on, when Noach Couch doubled and scored on an RBI ground out from Jacob Miller in the bottom of the first. That was all the runs either side allowed through five scoreless frames, as Country Day’s Finn Howell dueled with Trinity’s Brady Ellison.

Though neither starter factored in the decision, both were factors on the mound. Ellison spun six scoreless innings, allowing two hits and three walks while striking out six. Howell recorded seven strikeouts, leaving the game with one out in the seventh after allowing three hits and three walks.

The real tug-of-war began in the top of the seventh. The Spartans rallied to take a 2-1 lead when Luke Shannahan’s RBI bunt single drove in Walker Matthews, and Bradley Hodges’ RBI single pushed across Shawn Andrade. In the bottom of the inning, Trinity rallied back to force extras thanks to an RBI single from Colton Avera.

The seesaw swung back to the Spartans in the eighth, when Tyce Moore scored on a passed ball. But the Conquerors responded yet again, this time when Miller tied it back up by scoring off a wild pitch that pushed the game into the ninth inning.

Andrade was 2-for-3 for the Spartans, and he was the only player on either team with multiple hits.