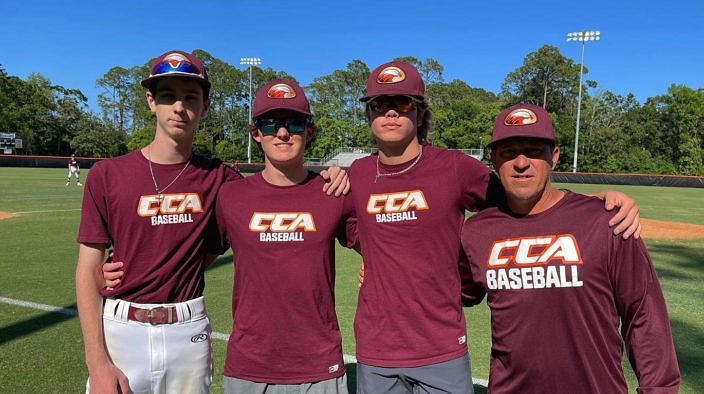 The Christ’s Church Academy Eagles celebrated several special members of their program with an unforgettable Senior Night on Thursday. It began with a tribute and ended with a walk off, as the Eagles came back for a 5-4 victory over the Hilliard Red Flashes.

Christ’s Church saluted seniors Jack Rhodes, Gage Spangler and Christian Lafond in a pregame ceremony in their final home games as members of the Class of 2021. The team also surprised Assistant Coach Kurt Dugan with a special salute and retired his number, as numerous former players returned to celebrate their former manager, who stepped down after the 2020 season. Dugan remains as the school’s Athletic Director, and also stayed on as an assistant on the coaching staff this season under new skipper Chris Spann.

As much as the night was for the seniors, the chance to honor their former manager took center stage. The COVID-19 pandemic robbed the program of the chance to properly pay respects to the coach who founded the baseball program. Since their first varsity action in 2008, the Eagles have won six district championships and were runners-up at the state tournament in 2016. Dugan went 208-161 over that time, and his #44 is the first retired number in school history.

“You find a place that you love, and you just stay,” Dugan said. “I learned that from my dad. My dad left the army in 1957 and he worked at a job until he retired. He was a college baseball coach for 36 years. He always told me to find someplace that you love and just stay there, and that’s kind of what I’ve done. My father died a long time ago, and the last time I saw ‘Dugan’ on a fence with a number, it’s his number, retired at Lipscomb University, Dugan #20. So I hope I’ve made him proud.”

The Eagles (9-8) certainly made their former coach proud one last time, by battling back for the hard-earned victory. Hilliard jumped out of the gate with four runs in the top of the first inning, and the Eagles chipped away to set the stage for the final rally to victory.

The first three Hilliard batters all reached base to start the game. Kaden Hobbs singled and Hunter Bentley and Leggarius Johnson both walked to load the bases, Scotty Hand earned the first RBI the hard way by getting hit by a pitch. A passed ball and an error allowed two more runners to score, and Brantley Hengerer had an RBI ground out that drove in another.

But once the Eagles got out of the inning, they did not allow the Red Flashes (6-16) to score any more. Rhodes overcame the shaky start and took the ball into the fourth, before Lafond relieved him on the mound and went the rest of the way. He struck out five in three-and-a-third innings of work to earn the win, allowing just one hit and no walks. 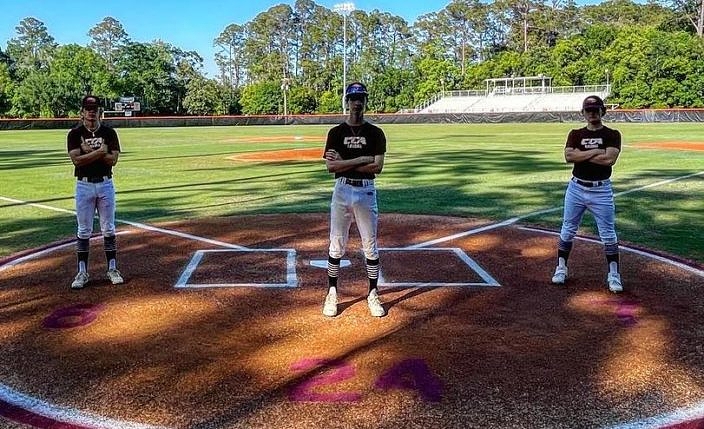 Senior #24 Christian Lafond (center) drove in the winning run to send these three seniors out with an unforgettable memory in their final home game. *Photo from @CCAjax.

Although he shared the spotlight on their day, Lafond emerged as the brightest spark in the biggest moments. Besides his work on the hill, he also came through with the winning hit that completed the comeback. Bromm walked to start the seventh, advanced on a passed ball and then raced around to score the winning run when Lafond’s hit found the center field grass.

Christ’s Church got lots of contributions along the way to make the win possible. Rhodes singled, advanced on a ground out from Jake Feltman, then stole third and scored on a throwing error to put the Eagles on the scoreboard in the third. He singled and scored again during a three-run fifth inning that tied things back up. Spangler was hit by a pitch and Rhodes and Feltman followed with back-to-back singles that filled the bags for Hayden Brown, who drove in courtesy-runner Grant Tedder with an RBI ground out. Rhodes came in on a wild pitch and Jake Amirault evened the score with an RBI single to center.

The win helps the Eagles close out the season strong heading into the district playoffs. Christ’s Church won six of its last eight games to end the regular season, as it looks to carry that momentum into Monday’s district quarterfinal against Parsons Christian Academy, at St. John’s Country Day.

Hilliard will take on the Lafayette Hornets on Monday, in a 1A-6 quarterfinal at Union County.