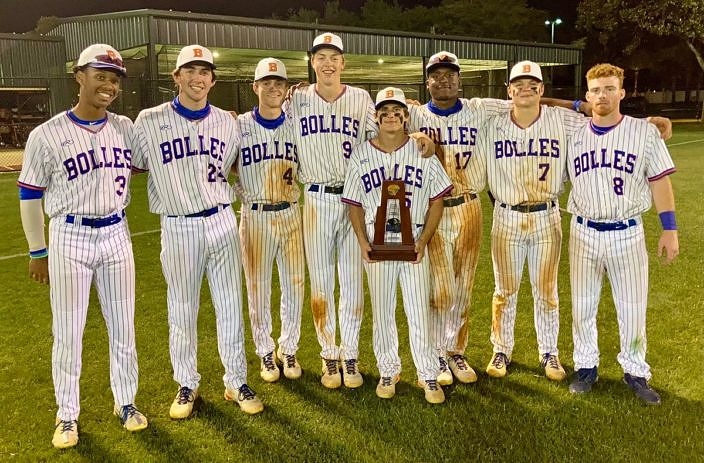 The Bolles Bulldogs won the 3A-4 championship with an 11-2 victory over the Episcopal School Eagles. *Photo from @TheBollesSchool.

The Bolles Bulldogs got off to a hot start and never looked back in Thursday’s District 3A-4 championship, scoring early and often to roll to an 11-2 victory over the Episcopal School of Jacksonville Eagles. Bolles erased an early deficit with two runs in the first, a five-year second that broke things open, and the Bulldogs added on more insurance runs in each of the next three innings.

It is the fourth district title in the past six years for the Bulldogs (22-4). They will now host the Baldwin Indians in next week’s regional playoffs, while the Eagles will travel to take on the Keystone Heights Indians.

Bolles got three home runs to lead the offense, including a two-run shot from Gunner Boree that gave the Bulldogs the lead in the bottom of the first. After Clayton Hodges laced a two-out triple and then scored on a wild pitch to give the Eagles (20-6) the lead in the top of the first, Jackson Mayo walked to start the bottom of the first and bring Boree to the plate. The senior got ahead 2-0 in the count and then jumped on an offering and sent it out of the park to right field.

Boree had a monster day, going 4-for-4 with two runs and four RBI.

Senior Jackson Baumeister also went deep twice to double his season total to four home runs. He was 2-for-2 with three RBI, three runs and a walk to reach base all three plate appearances. Tanner Zellem was 1-for-3 with a double, three RBI and two runs, and Burke Steifman was 2-for-4 with a run.

Ian Moore was 2-for-3 with an RBI for the Eagles, driving in Dillon Haines in the second inning after his only hit of the game led off the second.