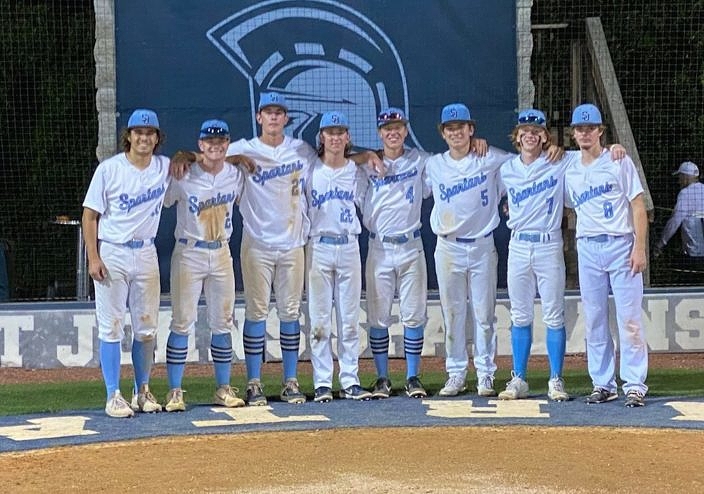 The St. John’s Country Day Spartans sent their eight seniors out with a big win over Bishop Kenny on Tuesday night. *Photo from @stjohnscountrydayschool.

It has been a special year for the St. John’s Country Day Spartans, and Tuesday night they added another exciting memory by rallying for an 8-4 victory over the Bishop Kenny Crusaders for a comeback on Senior Night. The Spartans (17-6) celebrated their eight seniors by defending their home field for their third straight home win. Trailing 2-0 heading into the bottom of the fifth, Country Day scored three runs in each of the next two innings to reverse its fate.

With one out in the fifth, the Spartans loaded the bases to mount the comeback. Senior James Oman singled and Jordan Taylor and senior Luke Shannahan both walked to fill the bags, and Tyce Moore delivered an RBI single to plate Oman. Seniors Jace Thomas and Trey Bradley then worked RBI walks that increased the advantage.

An inning later, Jordan Taylor capped off his big game by putting the game away with a three-run home run. Senior Connor Moore and Oman both singled to put some ducks on the pond for Taylor’s hot bat, and the junior came through with his second homer of the night. Bradley also hit a two-run home run that gave the Spartans a 2-0 lead in the bottom of the first, which also scored Oman, after he tripled with one out.

Bradley went 3-for-3 with five RBIs, three runs and a double. He also walked once to reach base all four plate appearances. Oman was 4-for-4 with three runs.

The Crusaders (11-13) answered back with all four of their runs in the fourth inning to try and play spoilers with the road win. Cal Leonard and Blake Barkoskie had back-to-back base hits to start the frame, and Charlie Pellicer came through with a double to center that tied things up. A sacrifice bunt from Garrett Corbett advanced Pellicer to third, and Mason Terry’s RBI double gave Bishop Kenny the lead. A John Costa RBI single then made it a 4-2 advantage, before the Spartans rallied to victory.