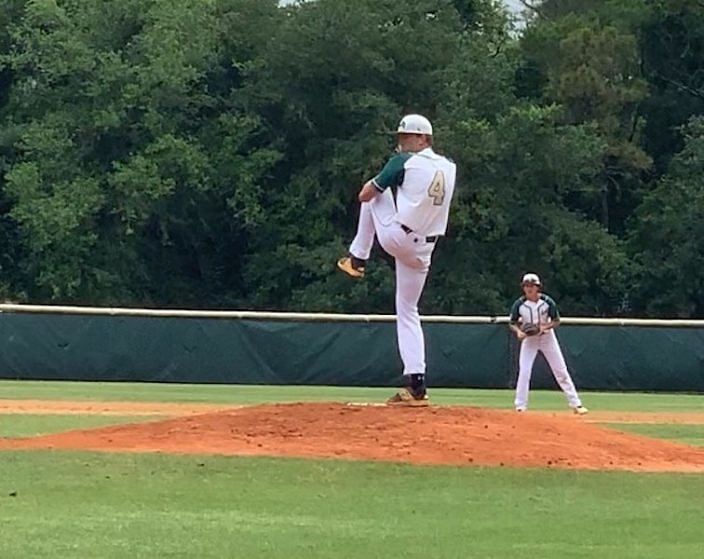 The St. Joseph Academy Flashes got their Spring Break off on the right foot on Monday morning, as Hunter Pankey and Jack Svedsen combined to throw a no-hitter in a 5-1 home victory over the Father Lopez green Wave. Pankey made the start and earned the win with five full innings of work, and Svedsen closed it out with two perfect frames. The Flashes (10-8) earned some payback, after falling earlier in the season to the Green Wave in a 3-2 loss at Vero Beach’s Jackie Robinson Ballpark.

It was the first action for Pankey after being shutdown for a few weeks with arm soreness. The junior Stetson commit knew he was ready to go when he felt great following his pre-game bullpen session, and he also credited catcher Aiden Torrez in returning behind the plate and immediately synching up with him.

Pankey struck out 12 in five innings, while allowing just one walk.

“Towards the end of the outing I definitely had more confidence in my fastball and my slider,” Pankey said. “I was mainly commanding my fastball very well, and then using my slider as my out-pitch. It definitely was a two-strike pitch.”

Since he was making his first return to action, St. Joseph Academy manager Phil Wisser had planned not to let Pankey exceed 70 pitches on Monday. But since he was grooving, when he got to that point they ran him out for one more.

“We had our horse on the mound,” Wisser said. “I knew that with Hunter on the mound they weren’t going to sniff him, and he was really good today. He struck out the first five batters he faced, and you could see he was on. He was throwing strikes and got into cruise control.”

St. Joseph struck early to back the pitching, taking a lead in the first and then adding to it over the next two frames. Evan Rodriguez scored off an error in the first, and Michael Del Verne drove in a run after getting hit by a pitch with the bases loaded and Grant Fortner scored off a wild pitch for two runs in the second. Fletcher Currie then executed a suicide-squeeze bunt that plated Jake Marcantonio in the third. 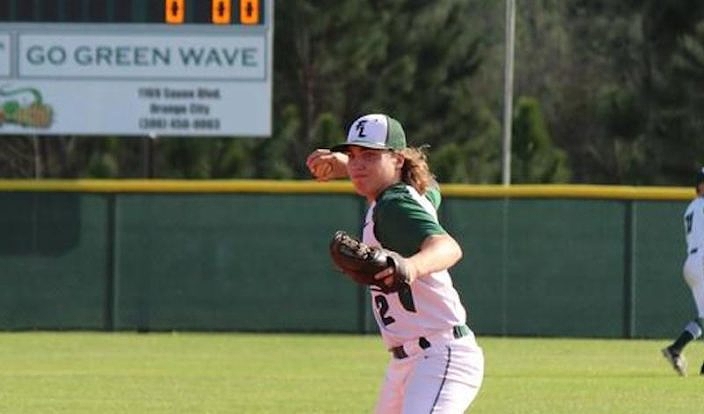 Isaiah Eberheart and the rest of the green Wave had their five-game winning streak snaped on Monday. *Photo from lopezathletics.com.

That seemed an insurmountable lead, based on how Pankey was throwing. Except he was pretty sure he would not be out there until the end.

“I knew I wasn’t going to be able to finish the game, because my pitch count was getting high,” Pankey said. “Coach has done a great job all year of being cautious, not just with me, but with everybody’s arms. I have full confidence in Jack behind me, that he would throw strikes. The defense has been playing well and I had full confidence in them as well.”

Svedsen made the decision look easy. The freshman faced six batters and he retired them all. He started off against the top of their order, and quickly got the first batter out. Svedsen then fell behind 3-0 to the next batter, but responded with three straight fastballs to get the out. Wisser said that was the turning point, and from there he was locked in.

“Jack is a competitor, a gamer from the south side of Chicago,” Wisser said. “He is a tough kid and he has a good changeup. Being up 5-1, he just attacked.”

Svedsen was successful in getting aggressive batters out in front to roll over and pop up a few balls. The defense did the rest.

The Green Wave (10-7) scored their lone run in the top of the fourth. Owen McKinley led off with the only walk for his squad, he advanced when the ball got past the catcher on a bunt attempt, and then stole third base to get within ninety feet of the plate. An infield error then allowed McKinley to score.

“There was only one walk – but that guy scored. That tells the story of what walks do,” Wisser said. “So we just keep telling our boys to limit walks, throw strikes and give our defense the chance.”