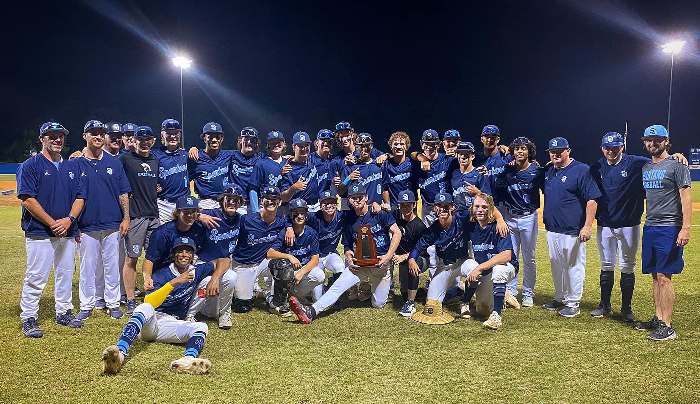 For the second straight season, the St. John’s Country Day Spartans are district champions. Thursday evening the Spartans added another trophy to the case with a convincing 11-1 win over the Trinity Christian Conquerors in the District 2A-2 championship. The #1 ranked Spartans improved to 21-4, while securing a home playoff game in next week’s regional playoffs. The team has had its sights set all year on returning to the state tournament, and Thursday’s win makes that road much easier.

The Conquerors (19-8) are no strangers to the state dance themselves, and were no easy opponent in Thursday’s title bout. But a five-run first inning helped the Spartans put things away quickly, and they led 8-1 after two innings of play.

Finn Howell paced the offense by going 3-for-5 with two doubles and three runs, and Kyle Boylston was 2-for-3 with three RBI. Bradley Hodges was 2-for-4 with a double and an RBI and Tyce Moore went 2-for-2 with a double, two RBI and two runs.

It was a tough day offensively for the Conquerors, who managed just two hits on singles from Brayden Harris and Ethan Wilford.