Suwannee Holds Off Wakulla for District 4A-2 Championship 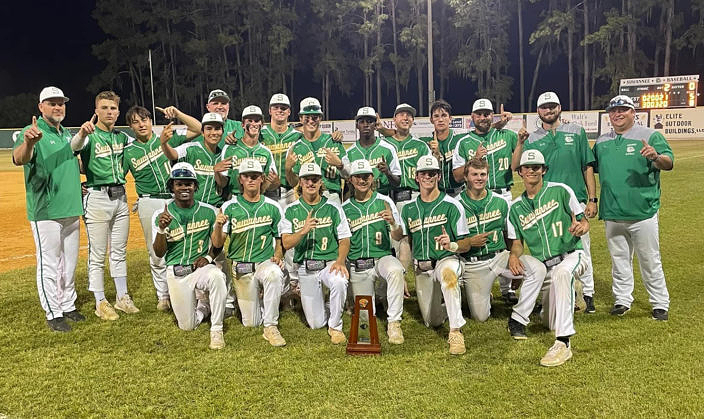 The 2022 District 4A-2 champion Suwannee Bulldogs. *Photo from @SuwanneHighSchoolAthletics.

The Suwannee Bulldogs punched in the clock and went to work again on Thursday, and once again they got the job done. Behind a heavy supply of offense, Suwannee slugged its way to an 8-5 victory over the Wakulla Ear Eagles to win the District 4A-2 championship. The Bulldogs (21-4) were led by home runs from Tyson Greene, Payton Waters and Malachi Graham, as well as an RBI triple from Josh Fernald.

Waters got his team in the early lead with a three-run blast in the bottom of the first. Carston Palmer led off by reaching on an error on a bunt attempt, and Camdon Frier also reached with a bunt single, before both then scored on a jog for a 3-0 advantage.

Wakulla (15-10) answered back with a pair of runs in the second, before Graham’s solo home run led off the fourth by extending it to a 4-2 lead. After Matthew Gil worked an eight-pitch at bat for a walk, Fernald rewarded that effort by lining an RBI triple to right field. Fernald then scored on a balk.

When the War Eagles again battled back to pull within 6-4 in the fifth, it was Tyson Greene who delivered the final knockout blow with his two-run bomb in the bottom of the fifth. Easton Kirby was hit by a pitch and then gave way to courtesy-runner Braxton Green, who immediately came around to score when Tyson jumped on the first pitch and deposited it over the center field fence.